Is spanish moss bad for trees? And where does it grow?

No, Spanish moss is not bad for trees they cause little to no detrimental effect on a host tree. The only thing Spanish moss uses trees for is support, and it does not affect them directly.

Although abundant growth may inhibit tree foliation and reduce photosynthesis.

The plant is not parasitic, but an epiphyte and has no roots but derives its nutrients from rainfall, detritus and airborne dust.

Epiphytes grow on other plants taking no water nor nutrients from them and use the host plant for support and protection.

The Spanish moss covers the stems and leaves with overlapping silver-gray scales, important for absorbing water and trapping dust and nutrient particles.

The ways it can damage the host tree are by over-shading the leaves, thus reducing photosynthesis, or, when it is wet and becomes too heavy for the branches.

Heavy moss on a tree can be a problem, but healthy trees will grow faster than the moss.

Many homeowners think the Spanish moss is killing their trees. But the decline of a tree with a heavy invasion of Florida Moss is caused by a different factor.

In fact, tree decline can cause Spanish moss growth as the canopy thins and lets in more sunlight for the moss to grow.

Although it does not take nutrients from the host tree, it should be thinned if it becomes too thick.

How to get rid of Spanish moss

If you want to get rid of Spanish moss you will have to do it manually as there are no chemical treatments available for its control.

Florida moss is too often blamed for problems caused by other reasons. Increasing tree vigor by proper maintenance, watering and fertilization is the best way to restrict the growth of Spanish moss.

If you want to remove Spanish moss, have an arborist remove it by hand. Although, it will grow back after a while.

Know that chiggers are common bugs in Spanish moss and they may cause a rash on the skin when the moss is handled. 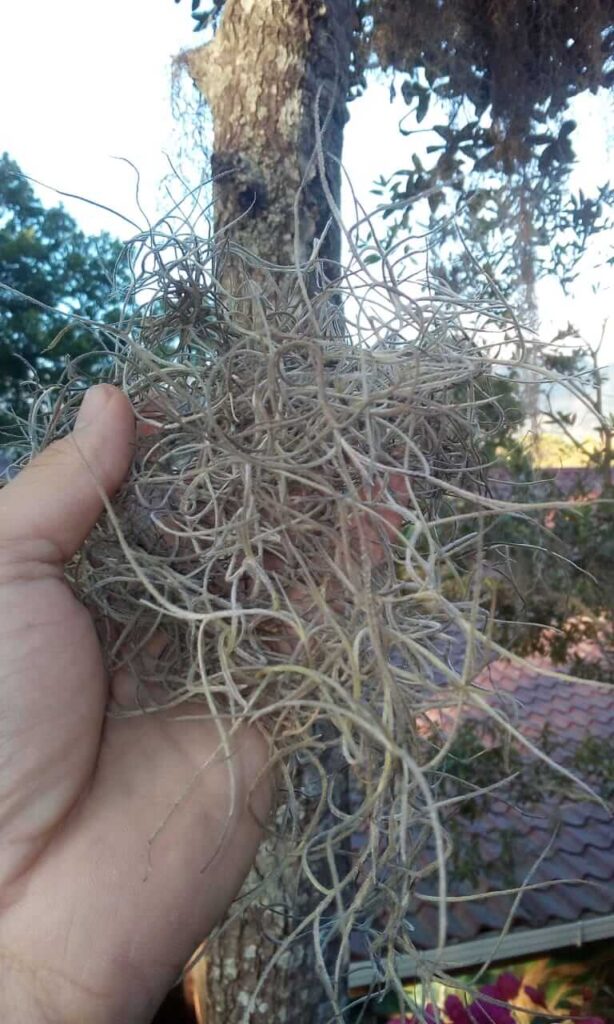 What makes moss grow on trees

Spanish moss grows from one tree to the other most commonly when their seeds float through the air and land on a good spot to grow.

Sometimes birds also propagate the plant by using it to build nests.

Spanish moss grows on trees in areas of high humidity but can survive well in dry habitats too. It can be found on live oak and pines that border estuaries, rivers, swamps, and along the coastal plains of the Southeastern United States.

How to grow Spanish moss on trees

The plant is easy to grow, as it needs no soil or transplanting, requiring only warmth and moisture.

The way you can propagate the Spanish moss is by seed or by division.

If you want to propagate it by division, place divided plantlets on bark slabs in areas with plenty of light and moisture, and regularly mist them with lukewarm water.

Florida moss grows well in full sunlight to partial shade, They need temperatures of 70 degrees or warmer in the summer and not less than 60 degrees in the winter.

The Florida moss is native to the Southeastern United States and Tropical Latin America.

How to care for Spanish moss

They require no care since they take nutrients from the air and debris that collects on the plant, but you can mist them regularly with lukewarm water.

Other Facts to know from Spanish moss

Here you can find all of our news and articles. Please let us know what you think in the comments and share with your friends.

Backyard Design Ideas That Your Dogs Will Love

Is Spanish moss bad for trees?